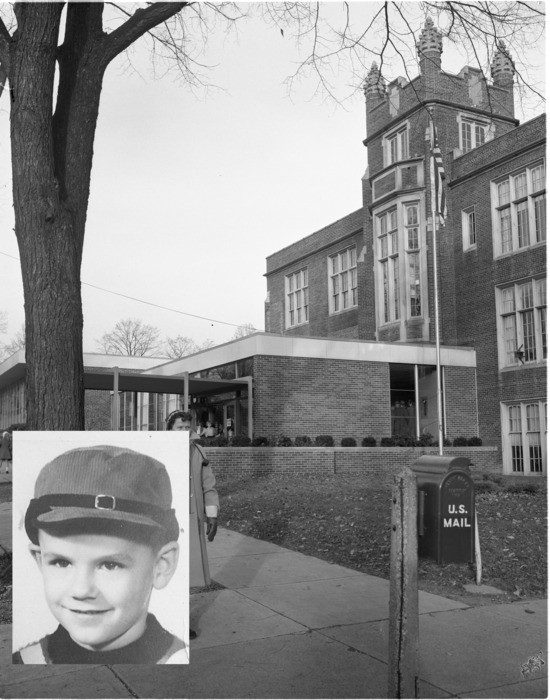 An imagined “memoir” in progress, with fictional details that I believe are consistent with what really happened, during my elementary school years from ages 5 to 11, growing up in the first half of the 1960s in the progressive college town of Ann Arbor Michigan in the U.S. Midwest.

Many of my huge Baby-Boom generation born starting in 1946 into a burgeoning middle class after World War II were beginning to come of age in a relatively prosperous America. We had better access to education, and through the growing electronic media of radio and television, access to a popular culture that included championing the expression of sexuality and other forms of human liberation. Facilitated by the development of a reliable birth control pill in 1960, elements of American culture were moving away from traditional values and social strictures towards more permissive and informalized attitudes. Rock-and-roll music, emerging in the 1950s borrowing from black R&B roots and becoming mainstream in the 60s was a huge cultural aphrodisiac, urging its listeners to “rock”, its thinly-veiled code word for sexual activity.

Add to this that I was growing up in a progressive college town where a secular humanism of the prevailing academic thought was trumping more conventional religious beliefs and practice. My own parents and many of their social peers did not go to church or share traditional moralistic attitudes with each other or their children. An exception was that homosexual behavior was still taboo, considered still a psychological disorder, even associated with pedophilia, if not a mortal sin.

My mom and dad were a pretty good example of an egalitarian approach to parenting that was all about providing an environment for me to pursue my interests and my life but not attempting to direct any of those pursuits. I say egalitarian, because they treated me as a fellow human traveler like them, with my own mind, my own will, and my own responsibility for directing my life. They saw their role as facilitators, to the best of their ability and resources providing me with a stimulating environment to live in and the developmentally appropriate “tools”, like imagination toys and a bicycle. Beyond that they mostly did not involve themselves in my activities, other than observing from afar and only participating if I asked them too and they were available to do so. Occasionally they would suggest an activity that they wanted to do with me, like throw a ball together or accompany them on an errand, just to talk and enjoy my company or maybe discuss a particular matter with me. It was all more like how good friends engage with each other than the more conventional parenting practice of raising and training a semi-functional being who is “just a child”.

Outside of my wonderful mostly unstructured summers, I was continuing to be transformed by the many hours I was required to spend in my school classrooms, with its adult locus of control. I was ever compliant when in the presence of those adults, particularly those responsible for directing and passing judgement on my actions. My survival mechanism was to slowly learn to seek my self-esteem by being the most well-behaved and praiseworthy “trained seal” I could be. More and more drinking the kool aid of compliance with each successive year in this institution.

I would try my best to continue to put on an exemplary presentation of myself to my parents in their presence. That I was thoughtful, capable, could fend for myself and would always come home when the street lights came on. These were in fact all true, but any negative feelings I had from time to time I was more comfortable sharing with my peers than my parents or other custodial adults.

In response my mom and dad continued to parent without any resort to the conventional behavior modification techniques of rewards or punishments. My mom would always provocatively announce to her peers that she didn’t believe in spanking, because it was essentially “hitting children”. But what she did not announce was that she and my dad did not employ any of the non-physical alternatives to corporal punishment. I wonder if they would have been able to maintain those rules of engagement if I had been one to push more boundaries (that they were aware of) or act out more in their presence. What my mom in particular did do, was to call out my bad behavior on the few occasions she would witness it, indicating, sometimes with an angry tone, that it was inappropriate and even that she was disappointed to see it. Given my continuing discomfort around adults plus my sense of pride in my good and capable kid persona, I was always quick to correct any misbehavior once brought to my attention, though the wound to my pride would often remain.

As my parents became more integrated into the predominantly white adult university community that lived in the neighborhood, I was meeting their kids at school and in the park, the latter always an informal gathering place for the neighborhood youth without their parents or other adults present. These were families with a sense of intellectual privilege, seeing themselves as members, even key players, in the progressive academic elite at this major public university, and therefore the intelligentsia of the country. Their sons and daughters were growing up in an enriched environment of progressive humanist ideas with most of my young peers also being given a lot of latitude to develop their unique talents and personas, and not being required to conform to traditional religious or other conventional strictures.

I began my mandated participation in the institution of formal K-12 education in 1960, the fall of the presidential campaign between John F. Kennedy and Richard Nixon and the former’s close victory (possibly influenced by alleged vote fraud in Texas and Chicago). Nowadays K-12 schooling has become such a high stakes endeavor that academically oriented parents like mine might do their best to “game” the system by letting their kid start school a year later than possible, thinking to give them some sort of developmental and competitive edge relative to other kids.

But in 1960 when I turned five, judging me to be an intelligent and precocious kid, my parents had my IQ tested to see if I could skip kindergarten and start public school in first grade instead. I tested high enough to be considered for entry into first grade instead of kindergarten, which my parents and school staff all agreed to. I don’t recall being consulted on the decision, and had no sense at this point what I was getting myself in for.

PART 1: REGULAR SCHOOL – After passing a test, and at my mom’s request, I start first grade in Bach elementary school at age five instead of going to kindergarten. It’s a very strange environment for me, since I’m not used to having grownups always telling me what to do and keeping track of and commenting on what I am doing. But at least my teacher likes me and is really nice, and I’m excited about being able to finish learning to read, so I can read all the books in dad’s office down in the basement, especially the ones about the War.

PART 2: PRESIDENT – It is October 1960, and the U.S. Presidential election is coming up, and my dad takes me to see Kennedy speak in the middle of the night at the Michigan Union in Ann Arbor, where Kennedy first spoke to the need for more young adults to get involved in public service, without specifically calling out his idea for the “Peace Corp”. Then both my mom and dad take me to hear Nixon speak at the train station, and I go with them to the polling place to vote.

PART 4: BLUE BOOKS – My world was about books right now and all the stories inside those books. My mom and dad reading them to me and me learning to read them myself at school. But at school I was also learning to write letters and words, so I decided to try writing my OWN book, and not just doing the pictures, but doing the words as well! My dad, still working on his PhD, was teaching sections of college classes to make money, and had lots of blue exam books, that he gave to his students for their writing tests, which were perfect for me to use.